I used up the last few pages of the Muji lined notebook I’d been using for morning pages and started a new-to-me notebook, made by the Life Stationery Company in Japan. The company has been around since 1946 and makes a range of products. These notebooks are available at a variety of online retailers, but I hate buying notebooks sight unseen. Luckily for me, my somewhat local Japanese stationery store stocks them and I picked up the plain version a few months ago. I’ve mostly used plain paper for my morning pages and I like having lots of pages, but it’s a tradeoff between a bulky notebook (my Bindewerk was 144 sheets with hard covers) vs. easy to carry but fairly quick to use up (my Muji was 72 sheets with soft covers).

The Noble Note falls somewhere between the two in terms of expense as well. I have to import the Bindewerks from Germany and the shipping gets quite high, whereas the Mujis are available locally and are at the inexpensive end of the spectrum. You can pick up a Noble Note for about $15 through Amazon (my local store charges $15.95, which I think is pretty reasonable for a small independent retailer).

The paper is ivory colored and very smooth, but all the inks I used dried rapidly despite that. I had no smearing whatsoever, even with my Cross with the Daily Italic nib (I’ve found the Cross ink to be pretty wet on other paper). 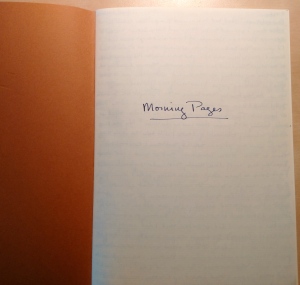 You can see that there is some shadowing from the writing on the next page, but no bleedthrough, and I was writing with a Montblanc M pen with Montblanc ink, which I find to be pretty wet. It takes everything from the TWSBI F point (pen pictured in first photo) to the Cross (used for the writing on the title page) without difficulty, and they all dry pretty fast. I got a fair amount of shading using an older Montblanc with a somewhat flexy M nib and MB ink, as well as with a Parker Sonnet F point with Parker ink, but less with other inks (including a different MB with MB ink).

I’ve only written a few pages in the notebook (albeit with quite a few different pens and inks), so I can’t say definitively how I feel about it yet, but so far it’s working really well. It may turn out to be my “just right” notebook for morning pages.

I included the TWSBI Eco in the first photo because I wanted to write a bit about it now that I’ve been using it steadily for a few months. It’s a great pen, especially for the price. I’ve had no quality issues, the ink flow is reliable, it hasn’t leaked on plane flights or the drive out (where the altitude ranged from below sea level to 9000 feet), and it’s just a pleasure to write with. I can’t believe the amount of ink it holds — quite a bit more than my Pelikan m400, which is my other everyday piston filler.

That said, I’ve discovered that while I love Japanese F points for writing in planners (I need to be able to write small and the Tomoe River paper does best with F in terms of drying time), I don’t like writing with them in morning pages, when I’m taking notes, or when I’m writing longhand at any length. I like the flow I get from European M points and also the two italic nibs I have (Linda Kennedy’s Daily Italic grind and a Prera 1.0mm stub nib). The F points just don’t write as quickly as I want them to, and they don’t flow the same way (obviously, since there’s less ink coming out).

It’s nice to have the range, though. If I had to use M points in planners I’d have a mess on my hands.